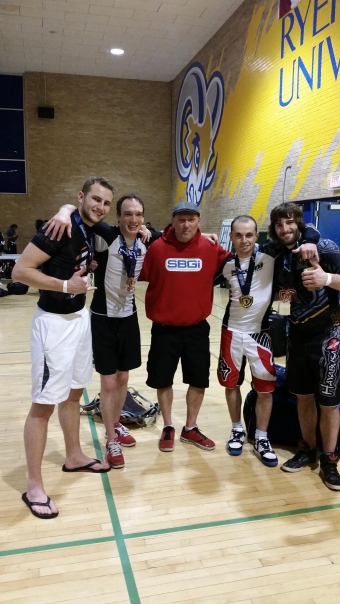 Saturday March 7th, 10 members of the Straight Blast Gym of Niagara Competition Team competed at the Grappling Industries Toronto Brazilian Jiu Jitsu Competition, and by the end of the day they brought home a total of 11 medals...the most successful TEAM from St.Catharines and the Niagara Region!

It was an outstanding day for the Team.  This was one of our most successful competition results with medals being won across the board from kids to both adult white and blue belt divisions, the Team tore it up.

Here is the breakdown of the medal haul:

Malachi Campbell: 7 - 8 yrs. Open All Belt -55 lbs Bronze Gi / Silver No-gi  This was Malachi’s first time ever competing...he is not afraid to go after it, and he put on an amazing display of “jits”...he has talent AND a work ethic that is going to serve him very well...slick on the mats and a pleasure to coach.

Olivia Nazar: 13 - 15 yrs. Open All Belt -145 lbs Silver Gi  Olivia had hard fought matches against a very skilled young man...she never quit on herself, even when things didn’t go her way...gave it her all and made the fights a back and forth battle...I am more proud of her for this Silver medal than when she won Gold last time...she exemplifies our motto “Humility Breeds Leadership...Adversity Builds Character and Strength.”

Allan Rudderham: White Belt -135 lbs Gold / Beginner No-gi Gold  Allan put on a phenomenal display of what we refer to as “posture leads to pressure”...no one could deal with his base and posture, from any position, and it led to him going undefeated and bring home 2 Gold medals...worth mentioning Allan has been away for 6 of the last 8 weeks due to school...he has his priorities in the right order, put school first and got in to train when he could and made the most of his training sessions which obviously served him well.

Marc-Antoine “Marco” Delannoy: Beginner No-gi -185 lbs Silver  Marco suffered a shoulder injury during his gi division and I thought that would be it for him....medical said he could continue if he wanted....he did...and he put on an exhibition of “heart and balls” to bring home the Silver...a great display of pushing forward through tough times...really happy for Marco with this win.

Jermaine Chandler: Masters Blue Belt -170 lbs Silver  Really happy for Jermaine on winning this medal...we’ve talked about being more assertive on the mats, and this competition it paid off for him.

Justin Cronkwright: Blue Belt -145 lbs Bronze / Intermediate No-gi Bronze  Justin put on a clinic in technical jits all day...he has only been a Blue belt for 9 days...had to contact the tournament to change divisions as he was originally registered for his white belt divisions...there were some high level competitors to go up against and Justin handled himself well...such technical jits...proper postures all around and smooth as silk with his movement...he puts in the work day in and day out...he will be a force on the competition circuit without doubt.

Brandon Peshko: Blue Belt -145 Silver / No-gi Bronze  Pesh was on fire the whole day...he finished some matches with the tightest arm bars and triangle chokes I have seen...his guard was virtually impassable...and his bottom game was spot on...tight defense that allowed him to get back to his guard game...he has been working on his guard game and this competition really showed just how far he has progressed with it...I am very proud of what he has accomplished.

I am humbled and privileged to be able to coach such fine people.  One of the great things about the competition was the amount of people that come up to us and tell us they love our attitude, both on and off the mats, and think that our athletes are some of the coolest people they have competed with.

Want to join our TEAM...give us a call and get yourself started NOW!